Please join us for an Economic Update from BNZ’s Head of Research, Stephen Toplis where he will be covering current economic conditions and market outlook for 2022.

Where: Top Shelf (above Detour Bar & Grill), 84 The Strand Whakatāne 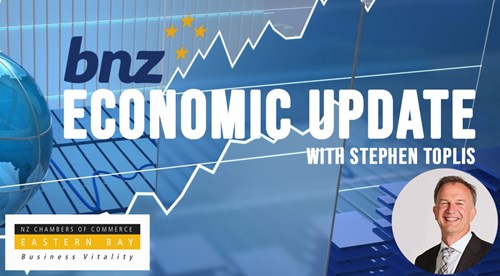 He is located in BNZ’s Wellington Markets Division where he is charged with providing an economic and political overview for the Bank’s wholesale operation. The end focus of much of his work is the analysis of business risk for the BNZ’s corporate clients.

At university Stephen completed a BSocSci in Computer Science before moving on to do a Masters in Economics.

Stephen is also contracted to the Hugo Group, a consultancy, which provides economic and political advice to a small group of New Zealand Chief Executives.